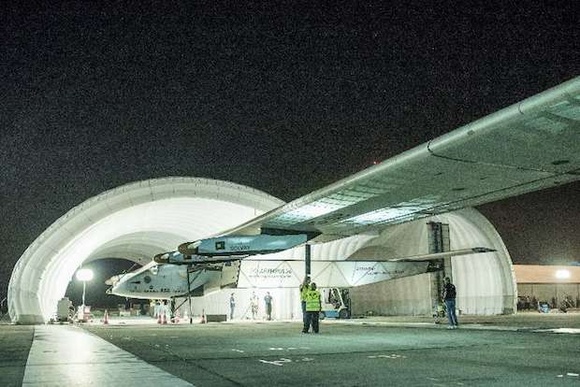 After cruising across the Middle East and much of Asia, a solar-powered plane now faces its biggest test yet - one that, if successful, could demonstrate that this global journey is more than a vanity project.

Andre Borschberg, co-founder and pilot of Solar Impulse, is set to take off as as Wednesday from Nanjing, China, on a five-day, five-night journey nonstop across the Pacific Ocean to Hawaii. The flight has been delayed over weather concerns, since the ultra-light plane needs almost ideal conditions to make the trip, and it could be delayed further.

"This is the moment of truth," Borschberg said of the plane, which until now has not flown more than 20 straight hours on any one leg of the trip.

For the pilot, the flight poses both mental and physical challenges.

Borschberg will be spending the five days in an unheated, 4-cubic-meter compartment. He will be wearing a specially designed suit that protects him from temperatures that can range anywhere from -20 degrees Celsius (-4 degrees Fahrenheit) to as high as 30 degrees C (86 degrees F). He also be forced to wear an oxygen mask when the plane flies above 11,800 feet to help avoid altitude sickness. The plane will reach a height of about 26,250 feet, comparable to conditions for climbers on Mount Everest.

"If successful, this flight to Hawaii will demonstrate the credibility of the vision (co-pilot) Bertrand (Piccard) had 16 years ago of an airplane flying for days without fuel to change our mindset regarding the enormous potential of clean technologies and renewable energies," Borschberg said. The two co-pilots are taking turns flying alternate legs of the flight, since there's only room for one man at a time.

So far, the around-the-world trip, which should take five months in all, has been going smoothly. The plane took off from Abu Dhabi in July, and on the second leg of its journey from Oman to India it set a new world record for a flight in a piloted solar-powered plane.

But this upcoming leg of the trip - the seventh - will be by far the longest yet and offer a true test to both plane and pilot.

The weather will be a challenge. Because the plane is powered entirely by the sun, it needs clear skies to allow its batteries to be powered up enough to get through the night. And because its 10 times lighter than the best glider, with a wing span matching a Boeing 747, the plane is more vulnerable to storms and turbulence than a typical airplane.

"It's a very complex mission," he said. "It's the only airplane in the world with unlimited endurance. It can fly a week or a month. But to do that, we need to first use the sun as a source of energy." 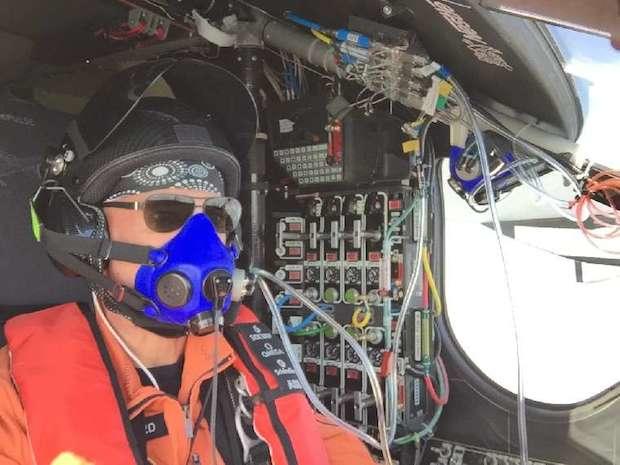 Bertrand Piccard in the cockpit on his way to Nanjing, China, completing leg #6 of the first round-the-world solar flight.

He will have to find a way to keep rested over 5 days and nights in the air. Borschberg plans to take 20 minute naps, six to eight times a day. Any longer and Borschberg fears the plane on autopilot could drift off its planned route, forcing him to "change course, change altitude."

"If I can do a little bit more, I will do it. The goal is not to break records of sleepless nights," he said. "I can't do that much because the airplane doesn't let me, the weather doesn't let me."

To maintain his mental sharpness, Borschberg plans to do yoga and mediation during the flight. Bertrand Piccard, a medical doctor who has flown balloons around the world, will handle the next leg of the trip from Hawaii to Arizona. Piccard plans to use self-hypnosis to get him through the long flight.

Piccard said the key in succeeding as a pilot under these harsh conditions was "making an alliance with the elements" - for a balloon, it's the wind; for the solar plane, it's the sun - and treating the cockpit as "our house ... our bubble."

"This has to belong to us. We have to tame it," he said. "So the first day in my experience is never so easy. But then we really incorporate this bubble and, when we land, it's difficult to leave it."

The goal of the project, Borschberg said, was to raise the profile of clean energyand demonstrate their technology works and could be used today in everything from new homes to appliances. But to win over skeptics who doubt the reliability of clean energy, the team is under pressure to reach Hawaii.

Still, Borschberg said falling short - being diverted by a storm, delayed indefinitely by poor weather or other technical problems - wouldn't mean they failed.

"Failure, difficulties is part of this kind of project," he said.