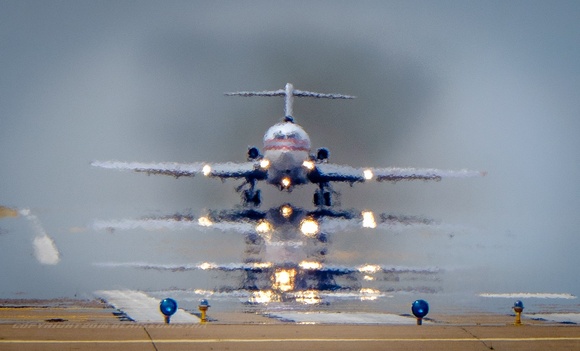 "Always great to start the weekend out with a shot that's "Different" but turned out exactly as you envisioned it. Here's today's effort:

Three days after the first Boeing 727 flew to its final resting place in Seattle, a number of surviving "Whisperjets" are still hard at work earning its keep.

One of Kalitta Charters II's -200 series jets, N722CK, rises out of the mirage of runway 16L on its way to McAllen, Texas this afternoon. Though still a half a mile down the runway, the three engine intakes as well as the cloud of exhaust from its three JT8D-9 SER Pratt & Whitneys are unmistakable, but undeniably an aircraft from another era. The 1974-built Boeing has just reached its "V2" speed and will be airborne momentarily."Blair Kooistra‎