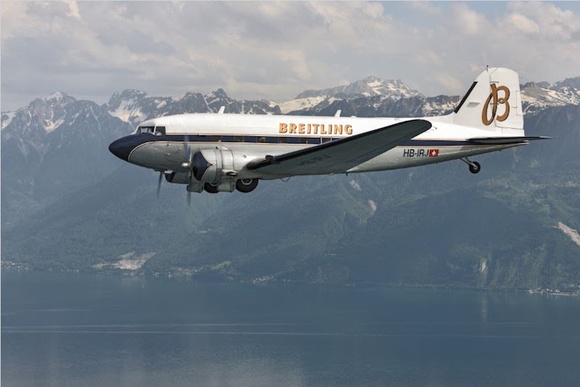 From March to September 2017, the Breitling DC-3 will do a grand world tour in several stages, an amazing accomplishment for this legendary plane that will be celebrating its 77th birthday.

Joining the crew on board the tour will be a 500-piece Navitimer limited edition.

This DC-3 HB-IRJ was delivered to American Airlines in 1940 and first used by the American military between 1942 and 1944, before resuming service on behalf of various commercial airlines.

Restored by a group of dedicated enthusiasts, it now flies under Breitling colors and participates in a variety of airshows.

While more than 16,000 were built, today there are less than 150 DC-3 aircraft in flightworthy condition worldwide, including the Breitling DC-3.

In 2017, Breitling will launch its DC-3 on a major round-the-world tour in several stages that will encompass the Middle East, India, Southeast Asia, North America and Europe. The tour will begin and end in Switzerland, starting from Geneva in March and winding up in September at the Breitling Sion Airshow 2017.

Breitling will mark the event by introducing a 500-piece limited edition of its Navitimer aviation chronograph. This steel Navitimer 01, powered by Manufacture Breitling Caliber 01, will be distinguished by its caseback engraved with the Breitling DC-3 World Tour logo.

Enthusiasts will have to wait until the fall of 2017 to get their hands on this model, since all 500 pieces will travel aboard the Breitling DC-3 around the planet. Each watch will be delivered with a certificate signed by the flight captain.